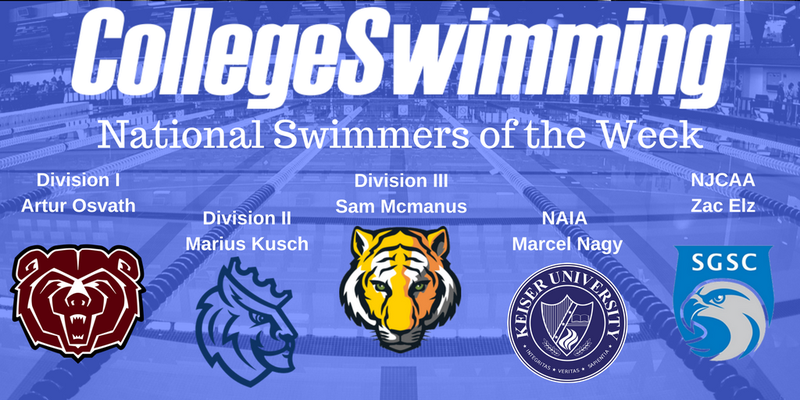 Stanford once again earns another National Award as Stanford and Missouri State are the Division I national winners. Stanford competed against UCLA and USC this past weekend. Janet Hu helped the Cardinal earn victories against both teams as she won 3 individual events and contributed to 2 relay wins. Artur Osvath (Missouri State) won his 2 national award in a row (last week’s Mid Major winner). Osvath posted phenomenal times of 1:54.65 (200 breast) and 53.21 (100 breast) this past weekend at the Shamrock Invitational.

Andrea Vega (Olivet Nazarene) and Marcel Nagy (Keiser) are this weeks NAIA Swimmers of the Week. While the NJCAA both come from South Georgia as Brittany Herndon and Zac Elz earn national awards.

All selections are independent of selections made by each conference.  Winners are selected from results submitted by Midnight EST each Monday.