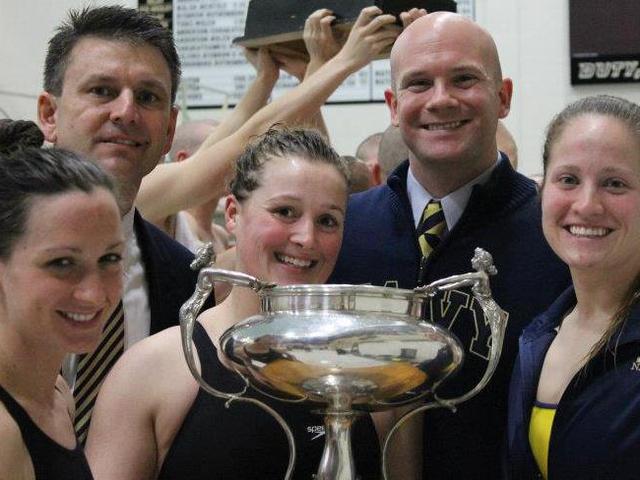 Rob Lias represents the notion that a great coach can come from the smallest of programs.  Rob Lias has risen from tiny Mount Union College, a school that could be called the Kenyon of Division III football, to the rarefied air of Auburn University.  It seems, however, that Coach Lias has found a niche.  Not only has he overcome modest beginnings, he's thrust himself into one of the more challenging recruiting assignments in the country - convincing women to enter into the military.

As Navy Women's Head Coach John Morrison explains, it is "wildly different" recruiting to the U.S. Naval Academy, but Coach Lias has proven up to the challenge and that is, in part, why he is one of our finalists for Assistant Coach of the Year.

Nomination from John Morrison, Women's Head Coach, US Naval Academy
Coming from a relatively modest competitive swimming background Rob quickly became a student of the sport and has evolved into one of the country’s greatest collegiate coaches.  He began to dedicate himself to swimming while in high school at Cleveland, OH, under the tutelage of Glenn Mills.  He went onto swim at Mount Union College.  After graduation, he worked together with “Total Immersion.”  His passion for collegiate swimming and coaching was evident and was fortunate enough to return to his alma mater as an assistant coach (2004), and then as graduate assistant at Auburn University under David Marsh (2005-2006).  He has served as the assistant women’s swimming coach at the United States Naval Academy from 2006 to present.

For the past six years with the Navy Women’s Team, Rob has had a significant impact in the success of our program.  His guidance has helped lead our program and student-athletes to six victories over Army, and three league championships.  Rob has helped guide our program to consistent appearances at NCAA Championships, USA Swimming Nationals, and Olympic Trials.

Rob is truly a student of our sport.  He is constantly learning, growing, and developing new ways to adapt the latest advancements within our program.  Rob has drastically improved our strength and conditioning program, as well as, added to the creativity in our technical pool sessions.  His strength and confidence in the art and technique of coaching continues to grow through his passion to learn.

Rob is a tireless recruiter.   Recruiting at Navy is wildly different than recruiting at a civilian college.  Not only are you selling a great school and program, like most colleges.  You have to recruit young women to the military.  Rob quickly learned and embraced this challenge and has taken our recruiting efforts to a higher level each year.  The last four recruiting classes have been our best in program history.

Rob’s desire for growth, learning and evolving our program in recruiting, training, and competition has made our team better. More importantly, he has been able to impart an everlasting positive impact in the culture of our program.  Rob has the unique ability to coach, motivate, and transcend individual performance into team performance and help the team identify and set standards that grow a culture of success.  In the short time Rob has been with Navy, he has helped change a culture and vision of our program to expect greatness in and out of the pool.

Rob has not only shared his learned technical knowledge and helped our team swim fast; he has devoted his efforts to making permanent positive impact in the culture of our program, helping our student-athletes grow into future leaders.  Rob has made our program tougher, our institution better, our Navy and Marine Corps stronger, and our country better for all.   For these reasons, without hesitation, I recommend Rob Lias for Assistant Coach of the Year honors.

Nomination from Student-Athlete:
It is a privilege to nominate my coach, Robert P. Lias, for the Collegeswimming.com Assistant Coach of the Year Award.

I have swum under the instruction of Coach Lias for three years while competing for the United States Naval Academy. During this time, our team has seen substantial improvements in times and performance, and I attribute a large portion of our successes to Coach Lias. He never ceases to present new and challenging workouts that are difficult yet meaningful to the team. Feedback regarding our technique and performance is constantly given, and any question presented to him is willingly and fully answered. In fact, he often sends out videos and articles to the team regarding new techniques that serve as visual aids to enhance our strokes. Even in the weight room, Coach Lias personally coordinates with our strength coach to create workouts that benefit us in the water.

More importantly, off the pool deck, Coach Lias continues his support by mentoring myself and my teammates through the stresses of a military academy. Indeed, life as a midshipman at the United States Naval Academy is demanding and difficult, and competing as a student athlete for a Division I swim team makes life in no way easier. Midshipmen live under a mission of developing themselves morally, mentally, and physically, and Coach Lias understands this fact exceptionally. He emphasizes the importance of grades and general military performance, and he is more than willing to accommodate practice time with other priorities a midshipman might have, such as extra academic instruction.  His devotion to the Naval Academy’s mission allows members of the team to develop themselves into competent leaders who will eventually lead sailors and marines.

Personally, I feel Coach Lias has significantly attributed to my success as a student-athlete at the United States Naval Academy. He has mentored me through some stressful times, and his support and understanding has aided me in becoming the best leader and swimmer I hope to be. To have someone that provides guidance not only about swimming but my future naval career is invaluable, which is why I am honored to nominate him for this award.