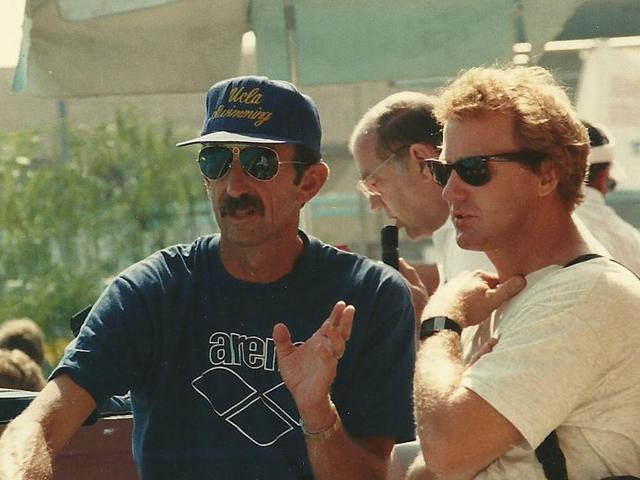 Stix Ballatore was a fighter, right up until the end.  The the legendary Florida and UCLA head men's swimming coach passed away on Friday evening in Gainesville, FL, following a long battle with bone cancer. He was 71 years old and was surrounded by his family.

Earlier this month, Ballatore had been voted into the UCLA Athletics Hall of Fame and was informed of his selection the following day (April 6). The honor didn't reflect the terms in which Ballatore left UCLA when the team was cut out from under him by the administration.

His tenure with the Bruins was highlighted by the 1982 NCAA championship and included top ten finishes in all but one season.  He was named Pac-10 Coach of the Year three times.  After UCLA eliminated its men's team Ballatore became head coach at Florida

While at UCLA, Ballatore coached 28 Olympians, including Brian Goodell, who won two Gold Medals in 1976, and Tom Jager, who won two Golds in 1984, two Golds in 1988 and one gold in 1992. Overall, he coached 52 All-America swimmers and divers who captured 26 NCAA individual titles and 62 Pac-10 crowns. His swimmers at UCLA set 11 American and NCAA records and held several world records, including Jager's 50-meter freestyle (21.81). They also earned several Academic All-America honors and seven NCAA Post-Graduate Scholarships.

When the UCLA men's swimming program was discontinued following the 1993-94 school year, Ballatore became the head coach at Brown University for two years prior to moving to the University of Florida and continued to enjoy success. Between his coaching positions at UCLA, Brown and Florida, Ballatore coached seventy-one different swimmers and divers who earned All-American honors at least once.

He was inducted into the American Swim Coaches Association Hall of Fame in 2009. Ballatore recently won the 2012 National Collegiate and Scholastic Swimming Award, presented by the College Swimming Coaches of America (CSCAA). Ron's son, Ronald, and Brian Goodell will be accepting the award in San Antonio in a few weeks.

Ballatore was more than just a coach; he was a great friend to all who knew him, possessing a witty, dry sense of humor that he shared with everyone. Whether it was handing out candy on Halloween wearing a mask he would say "is even uglier than I am," making his famous Caesar Salad with the all-garlic dressing or having his team lead an "Icky La Boom Ba" cheer for the football team, he was, to everyone at UCLA - Ron Ballatore: "the man, the myth, the legend."

Ballatore, who was born in Chicago, coached at Pasadena City College prior to coming to UCLA. He is survived by his wife, Ann, daughters Lisa, Jenne and Angelina and sons Ronald and Brent.
Tweet