Twenty combined event victories helped the Florida men’s and women’s swimming and diving squads kick off the 2009-10 season with wins over Virginia Friday afternoon in Charlottesville, Va., at the Aquatic and Fitness Center. Both teams maintained an undefeated all-time slate against the Cavaliers (8-0), the men winning a 159-141 decision, and the women capturing a 166.5-131.5 victory over UVA.

(Photos Courtesy The Swim Pictures)“We were really pleased to start as well as we did,” head coach Gregg Troy said. “We had some outstanding swims today on the men’s side – Shaune Fraser and Conor Dwyer stood out. Our freshmen did well; Jason Taylor swam a good 1,000 free and our divers also performed very good. Overall, we did really well against a really good Virginia team.” 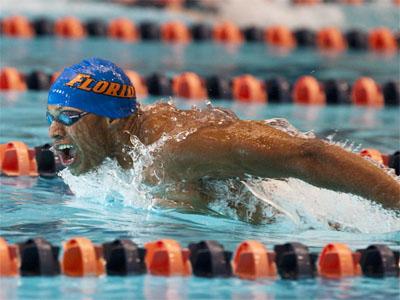 "It was a terrific meet and I was extremely pleased with how we raced," Virginia head coach Mark Bernardino said. "This was an extraordinary talented team with a lot of veterans and for our kids to come out and get right in their grill and race them with as much energy and as much effort as the did really exceeds our expectations for this early in the season. A lot of those races came from the heart."

Three event wins by senior Shaune Fraser (George Town, Cayman Islands) and two victories each by sophomores Shara Stafford (Topeka, Kan.) and Anthony Lewark (Davie, Fla.) and senior Kara Salamone (Hollywood, Fla.), assisted the Gators in kicking off the young season 1-0. Both the UF men’s and women’s 200-yard medley relays and the women’s 400-yard freestyle relay joined forces for victories, starting and ending the dual with the Cavaliers on a high note.

“The women’s meet was really good the whole way through,” Troy continued. “It was a great way to start season visiting such a good Virginia team. We were impressed with Teresa Crippen, who swam a lot of events and did very well. Our freshmen and divers really stepped up and overall it was a pretty good start.”

On the women’s side, Florida won 10 of the 16 events, with a stellar swim coming early by freshman distance freestyler Corinne Showalter (Sarasota, Fla.) in the 1,000-yard free. Showalter clocked a 9:54.62 to take the win.

In middle-distance freestyle action, Stafford, who suffered a season-ending foot injury prior to NCAAs last season, led the way for the Orange and Blue, capturing wins in both the 100 (49.70) and 200 (1:48.34) freestyle events, while sophomore teammate Melani Costa-Schmid (Palma de Mallorca, Spain) cruised to a 4:48.42 win in the 500 free.

Defending 100-yard backstroke national champion Gemma Spofforth (West Sussex, England) rallied for a win in the 100-yard race (54.04), while sophomores Teresa Crippen (Conshohocken, Pa.) and Lily Ramirez (Gainesville, Fla.) took second and third in the 200 back with times of 1:58.06 and 2:01.43.

On the diving front, the Gator women swept on both the one and three-meter boards, led by Salamone (315.52) in first, junior Monica Dodson (Franklin, Ind.) (276.22) in second and sophomore Kaylee Doback (Brandon, Fla.) in third (258.98) on the one-meter springboard. In the three-meter competition, Salamone placed first with a score of 331.13, while Dodson and Doback tied for second with 289.50 points.

Impressive performances by junior Conor Dwyer (Winnetka, Ill.), a transfer from the University of Iowa, and Fraser, led the UF men’s squad to its eighth series win over Virginia. Florida captured 10 of 16 events in the men’s competition.

Dwyer showed strong performances his first meet as a Gator in the freestyle events, clocking a 1:37.31 in the 200-yard free to take first in the race ahead of Virginia’s All-ACC selection, Scot Robison, who took second.

In the men’s 50 free, Dwyer teamed up with junior Brett Fraser (George Town, Cayman Islands) and senior captain Roberto Gomez (Weston, Fla.) to sweep the event, Fraser finishing first (20.57), and Dwyer (20.78) and Gomez (20.86) placing second and third, respectively. The freestyle duo of Dwyer and Gomez collaborated for second (44.92) and third (46.39) in the 100 free two events later.

Florida senior Omar Pinzon (Bogota, Colombia) and Fraser (B) teamed up in the men’s 100-yard back, finishing second and third, clocking times of 49.54 and 49.70, respectively.

Lewark lit up the boards for the Orange and Blue, diving to a win on the one-meter springboard (343.27), almost 44 points ahead of the second-place finisher, and also taking the three-meter title with a score of 347.63, just eight points shy of his career-best score in the event. Junior Grayson Patten (West Palm Beach, Fla.) placed fourth in both the one and three-meter competitions.

"It was awesome; such a great experience," Olson said of her first college meet. "Every single heat you want to cheer and you want to watch. I was really excited and I think that's why I did well."

"Lauren Smart was outstanding for our women," Bernardino said. "Christine Olson had a great beginning to her career, as did Lauren Perdue, another first year who got after it and swam well. Mei and Kat were outstanding Liz Shaw had a solid meet too. It was just a solid team effort with everybody trying to contribute."

"It's always one of the most exciting meets when we swim against Florida," Shaw said. "They are a top-5 team and I love going up against them. They always race tough and they never die. This was such a great taste of NCAAs for us and it was a great way to start off the dual meet season."

"We love swimming against Florida because our coaches are similar and both teams have similar racing styles," Azar said. "It's great to go against a team that is fast this early in the season. I think we did really well. You never know how fast you are going to swim compared to how you are feeling, but you can't let that bother you. I am happy and I want to continue to improve throughout the year."

"Matt, John and Scot all stepped up," Bernardino said. "I thought Matt Houser and Tom Casey, an unheralded first-year, really did a nice job. I am pleased with how our relays raced."

On the boards, Briggy Imbriglia finished second and Alex D'Ambrosio third on both the 1-meter and 3-meter boards.

Both Virginia squads are back in action on Wednesday, October 21 to take on Atlantic Coast Conference foe Virginia Tech in Blacksburg, Va.
Tweet